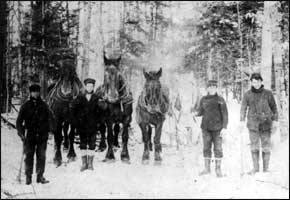 There were also many lumbering camps in the area from about 1860 until 1897 when the lumbering era in Michigan began to slack off. Red Keg (Averill) and Camp 16 (Edenville) being the most famous. Maxwell Camp No 2 was located in Hope Township.

In the 1920’s Frank I. Wixom built power dams at Edenville and Sanford creating Sanford and Wixom Lakes. From about 1932 until 1940 he staged the annual “Lumberjack Picnics” in Edenville where as many as 60,000 people attended the festival. Even Spikehorn Meyers of Harrison attended with his bears and people from Maine to California were present. The approach of the war brought an end to the festivals.

Quoted from “Upper Tittabawassee River Boom Towns” by Stan Berriman: “The first lumberjack festival {in Edenville, Michigan} was held on August 16, 1932, and was a preview of the many more that were to follow. August 30 was the date set for the second festival in 1933, and for this year the entire town was dressed in old-fashioned costume. A log cabin-style museum was set up and a goodly collection of antique artifacts were made available to the viewing public. Between 10,000 and 12,000 people attended. The following day, August 31, the entire crowd was thrilled and amazed when Bill Maxwell put on an exhibition of how to escape tumbling timber. 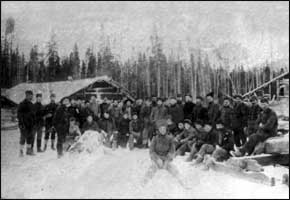 The main attraction of the day was the top loading exhibition put on by Bill Pick of Harrison and Este Mitchell of Sanford, assisted by Guy Boman as top loader and Fred Lewis as set-up man. Competing against this team was the one headed by Bill Maxwell and Bill McCann, both of Hope assisted by Al Bird of Edenville as set-up man and Millard Maxwell as top loader. Maxwell’s team won, but not before he had given the crowd the thrill of it’s life when he slipped as a log came up at a wrong angle and took Bill to the ground with it. Quick as a cat, despite his age, Bill shifted in midair and struck the ground rolling to avoid the tumbling log, and just as quick was back on the load again to receive the next log. A tremendous exhibition of skill, courage and dexterity.” 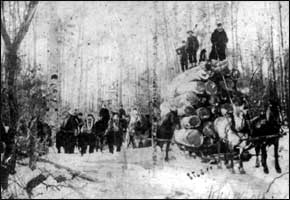 To look at Hope Township now, you would not guess that at one time lumbering was the major industry. We now consider ourselves a quiet farming community.